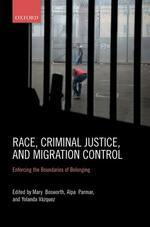 This chapter considers how biased policing practices, combined with institutional cooperation between immigration and criminal law enforcement agents, influences broader trends in deportation. Deportation laws in the United States are race- and gender-blind, but their implementation is not. Ninety-four per cent of interior removals involve men, even though women account for 47 per cent of unauthorized immigrants in the United States. And, 88 per cent of interior removals involve people from just four countries: Mexico, Guatemala, Honduras, and El Salvador, even though nationals from these countries only make up 66.3 per cent of unauthorized migrants. An analysis of how deportations happen that puts together on-the-ground practices of policing with immigration law enforcement cooperation helps us to understand these gendered and racialized patterns of deportation. This chapter draws from interviews with 117 deportees in the Dominican, Republic, Jamaica, and Guatemala in 2009 and 2010.